In a town with no theatre, cinema or bowling alley…PREsenting…!

Bet Shemesh is a pretty humdrum place and, aside from the odd headline-catching demo by extremists against this that or the other...there’s not much happening for kicks around here.

A friend who sits on the city council invited me to pass an hour or two at the routine council meeting yesterday.

Did I get bangs for the buck (admittedly, it was free) in terms of high drama! 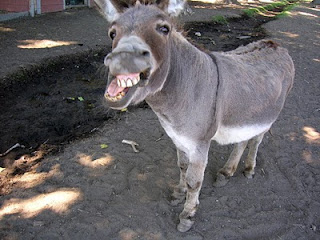 I should have suspected something, when I had to pass by a donkey, tethered outside the Town Hall building, while I sidestepped the plentiful evidence of its healthy appetite, piled and fly-infested on the pavement.

Once I entered the building, and headed to the Council Room, I was puzzled why there were two policemen at the door as I walked in?

The modest board room of the 1950’s Bet Shemesh town hall, was packed. The small air conditioning unit wasn’t designed for the combination of loads of people, and the hot day.

Around the board table were around a dozen council members, and then around them were local press representatives and a few members of the general public. I was part of Joe Public.

I was a couple of minutes late, and R.Dovid Weiner (UTJ) was well into his devar torah (sermon).
He was being heckled by Motti Cohen, who is a sephardi secular member of the council, dressed in a flamboyant pink shirt, with the top few buttons open.

Mayor Moshe Abutbol, then called the meeting to order.

I’m not sure why he tried, because there was little semblance of order.

Throughout the meeting, the members shouted, stood up, waved threatening fingers at each other, cursed, and generally harassed each other.

The members of the public consisted of a couple of families and their allies, who had recently been evicted from their homes. The donkey outside the building, evidently belonged to one of the families.

Whenever the ‘discussion’ (debate, argument, diatribe, whatever) abated for a moment, these two families jumped in shouting and gesticulating frantically, waving family photos, and cried.

The policemen intervened several times taking various unruly members of the families outside, before letting them back in again to shout some more.

There was a long agenda of decisions, votes and reports, which Moshe Abutbol valiantly pushed along.

“Item 7: Purchase of Additional Trash Containers. Any comments or questions?”

Sounded reasonable enough to me. But, heh, what do I know.

“What happened to the old ones?!”, shouted Shalom Lerner (Beyachad).
“I bet they got destroyed in the extremist demonstrations” suggested Motti (demonstrators use them for burning stuff, blocking streets and making mess).

A reasonable theory – I bet the manufacturer’s warranty wouldn’t cover that.

“The trash containers are supplied by a well known criminal mafia”, he explained grim-faced, “and Bet Shemesh is the center of their dastardly operations. That’s why the Municipality is ordering more of them.”

The two policemen pricked up their ears; and then went back to hauling out members of the public.

There were some pretty heavy items amongst the bureaucratic nonsense.

All approved between the theatrical dramas and antics.

I guess when the outcome is predictable, they have to create more interesting material to bring the crowd out to these Town Council meetings.

Next time you’re wondering what on earth there is to do on an evening in Bet Shemesh, check out the Town Hall.
beit shemesh municipality