Showing posts from July, 2014
Show All 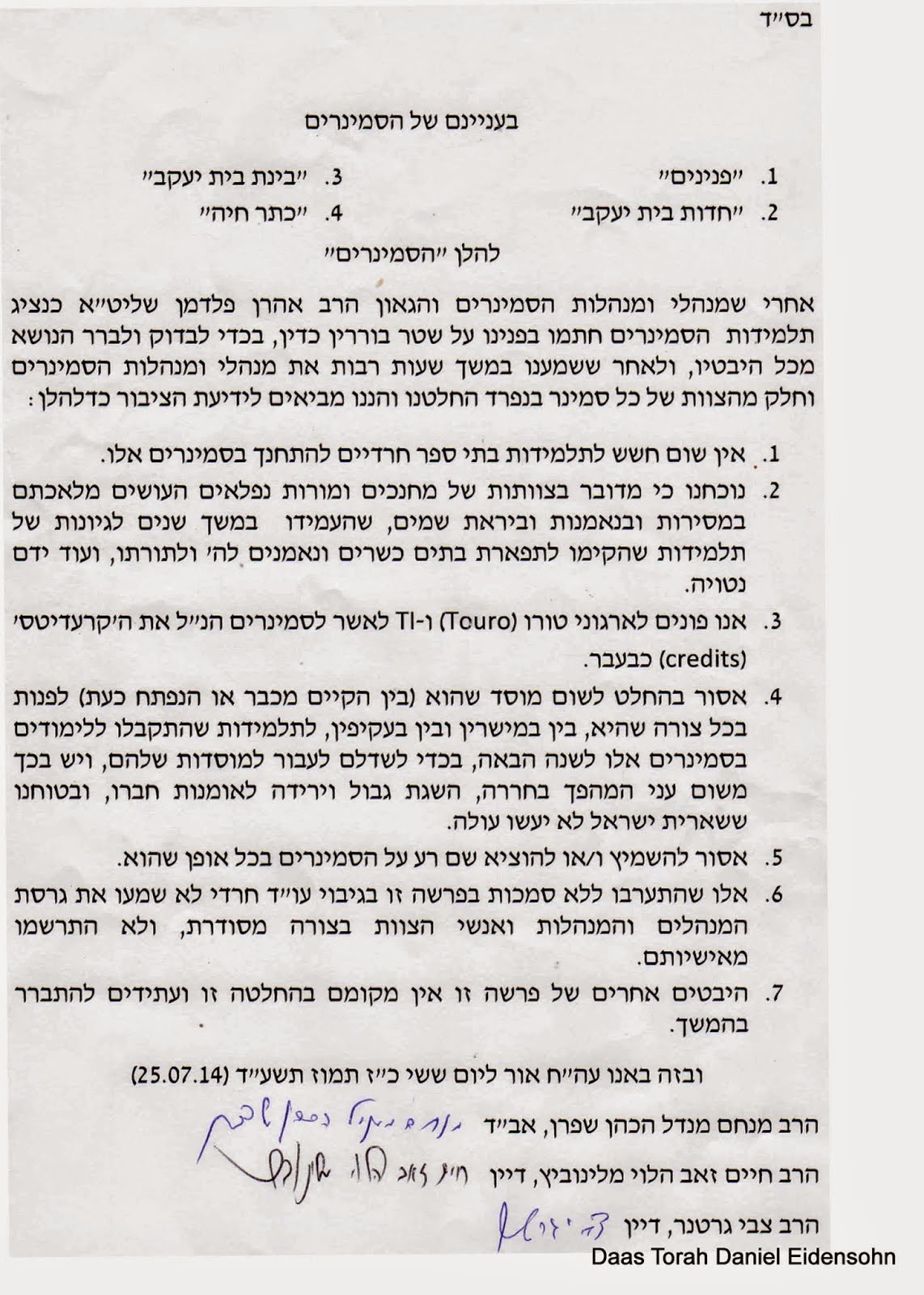 [Part One of Two Articles]

In the continuing saga of Rabbi Elimelech Meisels, the seminary-mogul who is suspected of "unwanted sexual contact" with his students, two new letters have been published, which make fascinating reading, and show a bitter struggle of different approaches to managing sexual abuse.  For the story-so-far, please refer to my previous article and the detailed coverage at Frum Follies.

This is my best-efforts translation. The original Hebrew can be found below (by kind permission of Daat Torah).

Subject: The Seminaries
Pnimim Chedvas Beis YaakovBinas Beis YaakovKeser Chiya
Hereunder "the Seminaries"
After the principals of the Seminaries and the Gaon Harav Feldman Shlita on behalf of the students of the seminaries
[DM: Batei Din in Israel operate under Israeli law as "arbitrators". They therefore need to be appointed as arbitrators by the p…
Post a Comment
Read more

How Many Innocent Civilians? 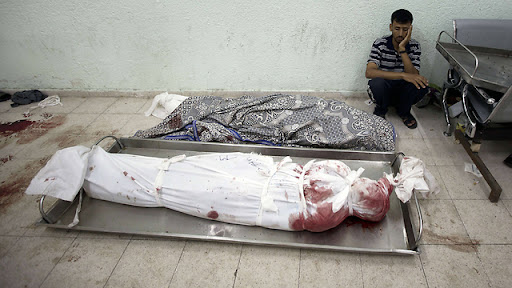 Hamas has every interest in promoting a narrative which would show Israel is slaughtering huge numbers of non-combatant civilians, and so generate international pressure upon Israel to cease the fighting.

Part of the agenda is to portray combatants who were killed in action, as being innocent civilians killed by Israelis.

Indeed, the numbers as presented do look horrific to every civilised person.

According to "a spokesperson from the United Nations Office for the Coordination of Humanitarian Affairs (OSHA)", quoted anonymously on YNet

You'll excuse a sterile approach to the numbers, which represent dead human beings, and are not solely statistics.

My reading of these numbers is:

If there were indeed 239 children, and 124 women, we can reasonably assume they w…
Post a Comment
Read more 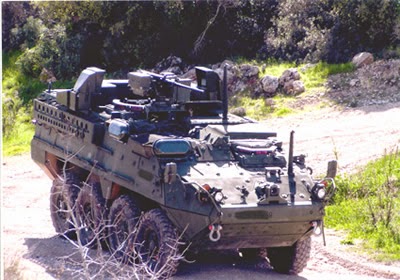 From a vantage point outside my home in Beit Shemesh, I can see the Iron Dome in action over the coastal plane, like a fire-work display in the skies over Ashkelon and Ashdod, destroying Hamas rockets fired at these cities from Gaza.

If Moses or his sister Miriam were to witness this incredible sight, I believe they would break into a Shira - a song of praise.

We are now all familiar with the concept of the Iron Dome.

It detects rockets fired at the area it is protecting.
It calculates the trajectory and therefore the landing point of the rocket.
It decides whether a particular rocket is therefore a risk to the population centers.
If it is, the system fires a missile at the income rocket.
The missile explodes in close proximity to the rocket, destroying the warhead and hopefully sending the rocket debris away from the cities

This cycle of events has to be quick, because depending on the range, there's only seconds, up to perhaps a minute, to respond effectively to the incoming th…
2 comments
Read more

This plague is even more severe than I had imagined.

Yes, each time, I am shocked, horrified, but I am no longer particularly surprised. My emotions are knocked each time, but my brain tells me it makes sense.

However, (even) I am surprised and shocked by a letter reportedly sent out to his alumni by Rabbi Meir Kahane, Minahel/Director of Chedvas seminary in Israel and a member of Aish Hatorah's faculty.

This letter brings to light a whole world of Orwellian thought-control and double-speak which is apparently endemic in seminaries - and has unfortunately been used to manipulate and take advantage of the girls.

The full letter is below and it's so (frankly) demented, it's hard to know where to start in analyzing it.

A Precedent for Kicking Hamas Out of Gaza 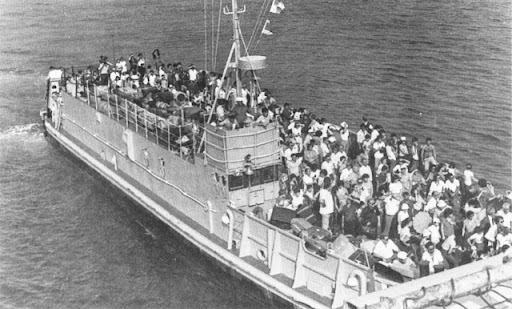 The stated Israeli objectives of this current war in Gaza are to find and destroy attack tunnels, and to neutralise the missile threat.

Neither the Israeli Government nor commentators (I have read) are mentioning regime change in Gaza as an operational objective.

There is a precedent to the idea that Israel's military force can be used to unseat terrorists from their position of entrenched power.

Back in 1982, under the national leadership of Menachem Begin and defense minister Ariel Sharon, Israeli troops retaliated against the PLO for the assassination attempt of Shlomo Argov, Israel's ambassador to London.

The severe bombardments of the PLO's fallback positions in Beirut, resulted in Yasser Arafat, leader of the PLO, who was based in Beirut, agreeing (effectively surrender) to withdraw his "troops" and organization…
2 comments
Read more 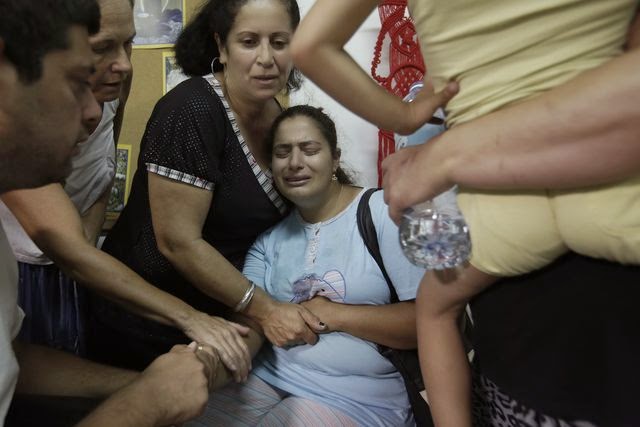 If you are feeling stressed or overwhelmed due to the current war in Israel, or are simply looking for practical information, you are warmly invited to contact the Israel War-Time Support Line in English.

This free & confidential service is offered 24/6 for English-speakers nationally. 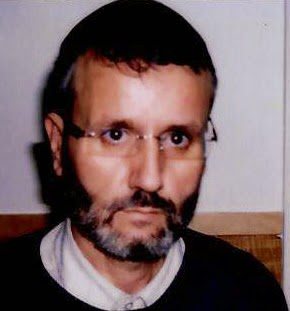 Since the recent publication* of information regarding a convicted child sex offender, (Gad) Yosef Ederi, there has been considerable concern in the Beit Shemesh community about the safety of our children.
Magen confirms that Ederi was indeed convicted and served prison time, both in Israel and lately in the USA, for crimes against children. He was assessed by the US authorities as Sex Offender Risk Level 2 (of three levels) - ie moderate risk of repeat offense.
Ederi was deported from the USA by the immigration authorities on 7th July 2014, into the hands of the Israeli authorities.
When he lived in Israel, Ederi was a resident of Beit Shemesh.
According to the prison services sex offenders monitoring unit in Israel, Ederi is now in a town far from Beit Shemesh and is under 24/7 surveillance & monitoring. (Israel has one of the most advanced sex offender monitoring programs in the world).

In the event that Ederi returns to Beit Shemesh, the Beit Shemesh police would be informe…
Post a Comment
Read more

According to an article on Mida news site, Uri Perednik (my nephew) was so disgusted by the lies (eg showing archive pictures of Syria and Iraq, as if they were Gaza) and vitriol on the Hamas Facebook page that he sent a complaint to Facebook that it is inciting hatred and violence.

Sure enough, Facebook did their job - and closed down the Hamas page!

This remarkably effective initiative by an individual, gives encouragement to the rest of us.

We'll leave the front lines to the IDF - but we can back them up from our laptops and smartphones!!

Bennett on BBC: Hamas a coward. Killing its own children

July 17, 2014
Naftali Bennet is Israel's most talented spokesman & advocate to the international media.

Bibi just sacked Dani Dadon as Deputy Defense Minister, mainly because he saw him as a PR liability.

While he's reshuffling the cabinet, I suggest Netanyahu should move Lieberman from being Foreign Minister (I never understood what he's doing there anyway, aside from his peripheral connections with the Russians), and replace him with Naftali Bennet. 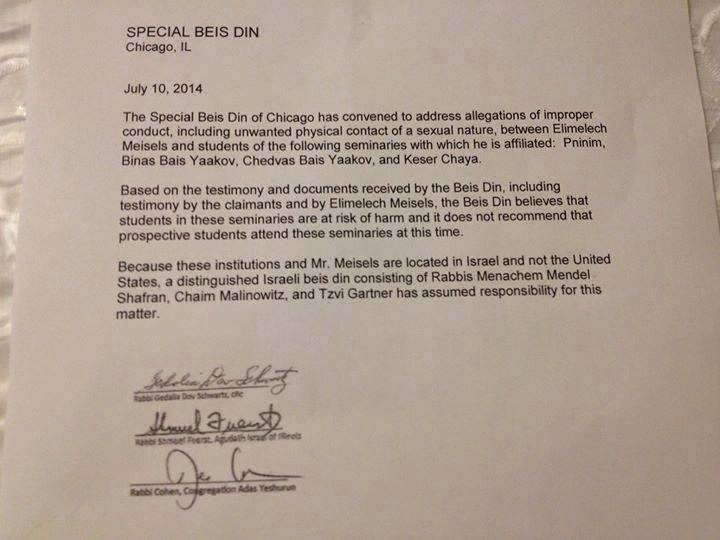 Yerachmiel Lopin's Frum Follies blog has again brought to light very credible allegations of sexual misconduct by a leading rabbinical figure, which has sent shockwaves through the American Chareidi establishment.

The Bet Din had concluded in favour of the plaintiffs, that "unwanted sexual contact" had taken place, and the letter was issued to warn against sending students to any of Rav Meisels' four seminaries, being: Pninim, Binas Bais Yaakov, Chedvas Bais Yaakov and Keser Chaya.

The letter concludes that the case had been handed over to an Israeli (ad hoc) Bet Din, consisting of Rabbis Mendal Shafran, Chaim Malinowitz and Zvi Gertner.

July 14, 2014
These are some examples of coping tools, in these stressful days under fire from Gaza (and Lebanon) (oh, and Syria...).

This is a kids' song, helping kids to learn what to do if the siren goes off...

And this is a parody of the well known Sesame Street song:

Here's a trance mix based on the Colour Red Alert:

Whatever it takes to get through all this physically safe and still sane.... 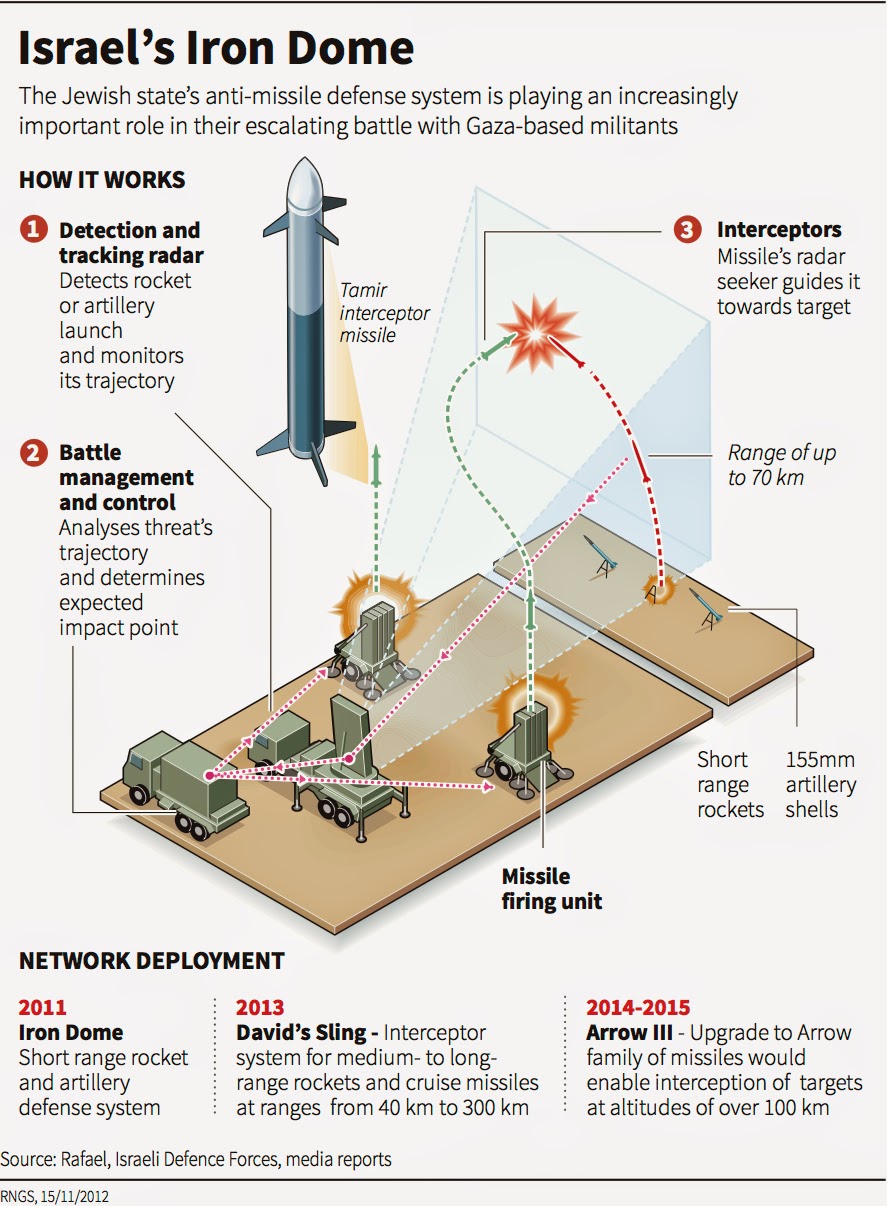 It's been a roller-coaster experience as a resident of Beit Shemesh, and as a citizen of Israel.

First, our country experienced the rare unity in our passionate two weeks of prayers for the welfare of kidnapped yeshiva students Naftali, Gilad and Yair.

The kidnapping reportedly took place just 20 minutes up the road from here, as the boys tried to hitch-hike from Gush Etzion in the direction of Beit Shemesh.

The tragic triple funeral for the boys was also just a 30 minute journey in the other direction from here, in Modein cemetery.

Along with many other Beit Shemesh residents, and thousands from around the country, I went to the funeral and also to the Frenkel shiva (Nof Ayalon).

The three graves were barely filled, when news came through of a grisly kidnap and murder of Mohammed Abu Khdeir, an Arab boy from Shuafat in north Jerusalem, whose burned body was discovered in the Jerusalem forest.

While Arabs rioted throughout the country, in protest at the murder, the Israeli polic…
Post a Comment
Read more

July 03, 2014
The Short Vort Today is Monday the 2nd of Tammuz 5774 and June 30, 2014
Please, Leave Me Be
If you are seeking from me words of comfort and consolation you will not find them. If you are reading this in order for you gain some sort of insightful understanding of the tragic events then I advise you to stop reading. This missive will not be one of comfort and consolation. If you are looking at me as the rabbi who undoubtedly has the proper response and is able to theologically articulate and make sense out of the tragedy, then you will be utterly disappointed. I have no words of comfort. I offer no consolation. I have no insight and no comprehension. I am numbed and I am left wondering and wandering in my grief and my loneliness. I cannot see the ‘good’ in this and I cannot comprehend the ways of the creator and certainly not of some of His creations. I cannot and hope to never be able to understand how a human being can murder three innocent human beings with the justification that they …
Post a Comment
Read more

Our Three Boys: Social Media in the Face of Censorship Yesterday evening I was in a shopping mall, and shoppers were glued to their cellphones and mournfully discussing with their friends the pending tragic news.

We now know that the boys' bodies were discovered by both volunteers and the army at around 5:30pm yesterday evening.

From around 6pm, the social media was carrying reports that the boys' bodies had been found - initially one body, then the other two.  WhatsApp, Facebook, emails, sms messages...they all carried these rumours.

I think every Israeli was expecting this grimmest of news, by the time the official announcement of the tragic deaths of our three boys, Gilad, Naphtali and Yair was published around 8:30pm.

There was a similar pattern at the beginning of this tragic episode, when on Friday 13th June, the news spread throughout social media that three boys had been hitch-hiking and were missing, presumed kidnapped. There were even reports out about a phone call to th…
Post a Comment
Read more
More posts