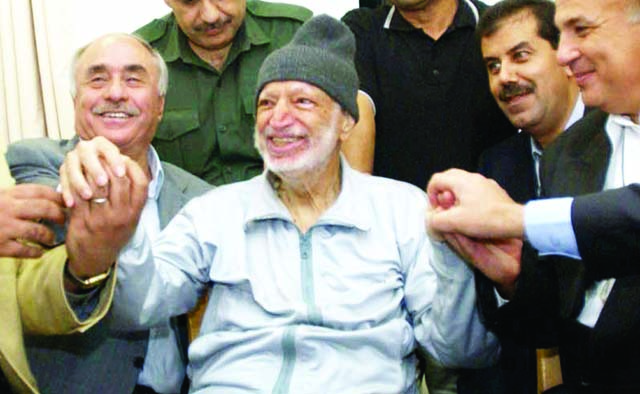 I'm not sure why the Palestinian Authority is bothering to dig up Yasser Arafat.

Apparently the traces of radioactive material polonium-210 were found on Arafat's clothes by a Swiss investigative team in July of this year.

Polonium is a rare material, which is extremely poisonous.

For example, by mass, polonium-210 is around 250,000 times more toxic than hydrogen cyanide.

To put it another way, one gram of polonium-210 could in theory poison 20 million people of whom 10 million would die.

It has a half life of 30-50 days in a human. In other words, after eight years in the grave, Yasser's unlikely to have much in the way of detectable Polonium.
Polonium-210 has been used, even recently, by the Russian secret services to discretely poison opponents, such as the murder of Alexander Litvinenko, a Russian dissident, in 2006 which was announced as due to polonium-210. (Litvinenko was a whistle blower on Putin's criminality, and was bumped off in London).

Even if polonium is a red herring, and none if found in the remains of his body, it was clear anyway that Arafat's most peculiar & dramatic death in 2004, was an assassination.

There was no adequate public medical explanation for the bizarre symptoms, releasing a barrage of speculation that, for example, Arafat died of AIDS and was a closet homosexual, and of course conspiracy theories abound.

After being holed up in his den in Ramallah for two years by the Israelis, Arafat was an intolerable liability to so many parties, it's hard to know who the most likely assassin was.

Obviously Israel had an interest in getting rid of the flea-bitten and still murderous terrorist, who was responsible for the murders of literally thousands of Israelis.

So did the Americans. Shortly before Arafat died, President Bush dismissed Arafat as a negotiating partner, saying he had "failed as a leader".

Of course, Hamas were (and are) arch foes of the PLO and expressed this in their coup in Gaza against Arafat's successor Mahmoud Abbas.

Aside from these front ranking suspects, Arafat was also hugely corrupt financially, reportedly pocketing up to Ten Billion Dollars (!!) of Palestinian national funds in secret accounts.

That much money can't be stolen from his own people, without generating many bitter enemies, particularly from within his own camp and from 'friendly' donor States and individuals.

In short, Arafat had so many enemies with justified reasons for assassinating him, that confirming he didn't die of natural causes (which is obvious), will not really solve the mystery of who gets the credit for finally ridding the world of him.

Indeed, that's why there wasn't an autopsy eight years ago, and the Paris medical report was never released.

So what's the point?

Leave off, and let the old terrorist roast in hell.